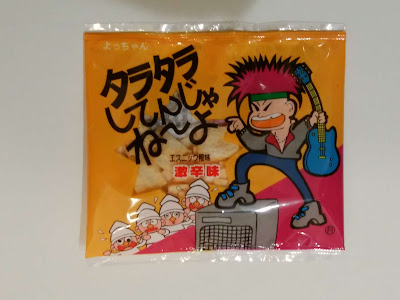 “Taratarashitenjaneyo” is a Japanese dagashi (snack) that became famous in Japan for being eaten by a Japanese professional golfer Hinako Shibuno who won the 2019 Women’s British Open.

It is a product made by the same company as “Yotchan Ika” which is familiar to Japanese. I heard that it is in short supply due to her influence, but I found it at a convenience store, so I bought it.

“Taratarashitenjaneyo” in Japanese means “don’t be doodling” in English. And “Tara” means codfish.

So, it is literally a pungent taste, with the strong pungency of doubanjiang (Chinese broad bean chili sauce).

That would be fine, but it’s too salty. It didn’t suit my taste.

I think it is a dagashi that people either love or hate.